Okay, so the signal leaves an instrument or a person's mouth and travels in a straight line through the recording chain. For the sake of simplicity, let's discuss the rest of this from the point of view of a vocalist sending one take into a microphone and down through the recording chain. Yes, there can be more than one signal path at a time, such as recording an entire band at once with 16 microphones or direct injection points.

Yes, the signal can move in loops in and out of a mixer or patchbay. Let's get all of those disclaimers out of the way.

You don't need to worry about that yet. We're keeping it simple and talking about one signal chain recording and processing one instrument or voice. Understand how this works and patchbays, ins and outs, busses, mono versus stereo, and the rest will explain themselves to you. Of course, depending on the application, the signal path may be the same, more complex, or far simpler than what's pictured above.

However, this is the quintessential signal path. Most home recording studio setups won't include an equalizer or compressor in the chain. They'll typically use software versions. But you need to know how they work so you can manipulate the direction of the chain within the computer's software mixer too.


Grasp this and you'll have the freedom of flexibility to record anything because you'll understand the logic behind it and be able to reason through any setup. Again, we are talking about any instrument that produces a sound. That could be the human voice singing, a beatboxer making noise, a stringed instrument like a guitar, a reed instrument like a flute, a woodwind, a brass instrument, etc. If it makes noise and you want to record it, it counts. This is the beginning of your signal path in the sense that this is the signal creator.

How to Setup a Recording Studio

Whatever sound is coming out of your instrument is creating sound waves in the air. The only way to accurately convert these instrument-based sound waves into an electrical impulse is through the use of a microphone. The key component of a mic that performs this task is the diaphragm, which may be large or small depending on the type of microphone. The technical magic behind the conversion may be different such as a piezo contact or a tube, but the goal and end result is the same.

At this point, your signal is no longer an analogue sound wave. It's an electrical signal. The best recording microphones will create and pass this signal as cleanly as possible while the worst will introduce noise and transients, worsening your quality. But either way, you now have an electrical signal you need to pass along. This means that for the signal to leave the microphone and move into the next component, you will have to use a cable. Any mic worth it's weight is going to be using an XLR cable.

We'll quickly discuss the types of cables later, just take not for now. All professional microphones use XLR cables. I've seen cruddy hobbyist mic's that have cables built into them that use TRS jacks.

How To Turn Your Bedroom Into A Home Studio (2018)

I hope to all that is good and holy that you aren't using a USB mic. Burn it in your brain: Microphone's record at mic-level, which is very quiet in the grand scheme of things. You have to boost that to line-level, and do it cleanly. You can't just turn up the gain or volume knob. So that's your current dilemma. You know you're coming out of an XLR cable and you know you have to have a piece of gear that boosts the mic-level without introducing a ton of noise.

The piece of studio gear that does that is the Electric guitars and the like come in at line-level and don't need preamps. But every microphone has to run through a preamplifier to boost the signal up to line-level. I remember when I first started at 13 years of age, I didn't know about preamps and I'd just crank up the volume as loud as I could and run a noise filter plugin. The noise was so loud that when it was removed good, it took out huge chunks of the vocals waveform as well.

You have to boost cleanly with a preamp if you're recording with a mic. A mediocre preamp won't do much for you while the best preamps will show you what your mic is truly capable of! So obviously preamplifiers are built to accept XLR cables since that's what all microphones are outputting with.

Preamps aren't quite as standardized. The studio standard is to output with a TS cable, since you're boosting a mono signal. If you're running two microphones in stereo, you'll likely use two TS cables in tandem. Some might give you the option to output the left and right channel together in a TRS cable. Some might even give you an XLR option.

Because we're teaching the old school method so that you can visualize the signal path, we're going to stay in the hardware realm and do this out of the box. Pretend we're recording to tape in not a digital file, so it needs to sound perfect before it hits the tape reel or we're wasting gobs of money. So what's the next step in making our signal sound clean and ready for the big time release?

The two main dynamic effects you will use to make your audio take presentable is equalization and compression. You don't want to compress before you EQ or you might trigger the compressor with a frequency that you'll end up removing later. 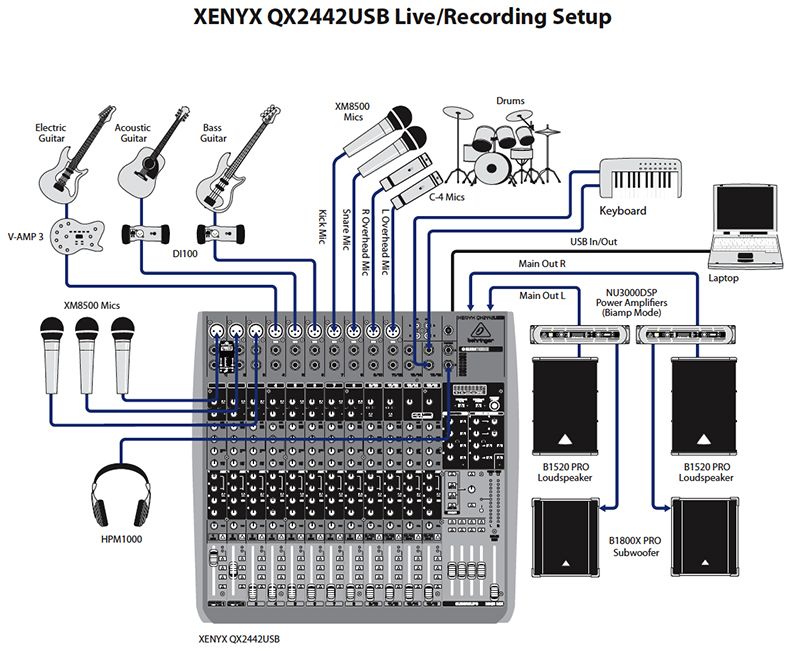 In that scenario, your compressor will be reacting to amplitudes in frequencies you never intended it to. So EQ comes first! Logic has dictated that our mono signal is going to leave the preamplifier through a TS cable and into an equalizer. The goal here is to clean up your sound so that only the frequencies you want to exist do and the others are playing at a volume that is pleasing to the ear and sits in the mix relative to the other instruments being recorded.

Because all other dynamic effects and time-based effects like reverb and delays are either triggered or reproduce exactly what sound you feed them, you want to equalize them before hand. There's not much to say here. While it's not always true, due to advanced techniques like parallel compression, typically you're going to want to tame your volume and make it more consistent across the frequency spectrum before you start applying time-based and spatial effects. Otherwise, you'll have them creating an even worse mess for your mix. So logic is dictating that the next step of the recording studio signal chain is Your signal will vary in amplitude for a lot of reasons.

Your vocalist may waver closer and further away from the mic, the acoustic guitar player might start strumming harder later in the take, you may not be using acoustic treatment so you're getting crazy peaks and dips depending on where the mic is set up, etc. You need to smooth all of this out and now is the time before you begin to apply reverbs, delays, and other time and amplitude-based effects. This is the job of the compressor. Again, you're likely still using TS cables for your connectors based on the standard of the industry. The reasoning is that you'll eventually have a boatload of compressors, EQs, and preamps.

While some here and there may give you the option of XLR cables, what you can be assured of is they will all accommodate TS cables, as will the patchbays that you'll be buying and using eventually. At this point, you could send your signal through an outboard reverb or any other set of effects. With modern day recording capabilities and software plugins, I'd recommend keeping these effects in-the-box, meaning you apply them after moving into the computer.

Doing so will open up an entire new world of options to you and the ability to undo mistakes you didn't catch at first here where they can be most devastating to a mix. Your signal has been boosted, balanced, and smoothed. The logical next step is getting it into the computer, which will be performed by This is typically the job of a sound card, but studio professionals need the highest quality converters. You can purchase a standalone converter or trust those that have been included in your interface. A studio interface essentially functions like a glorified sound card.

It may come in the form of a mixer or a racked piece of gear. I prefer the racked variety and use the digital mixer in my DAW. Following the logic of our recording chain, you'll be entering the interface using TS cables. You should understand by now what steps are being skipped and which you'd want to add back into the chain if you don't want to EQ or compress digitally.

The converters are taking your analog signal, the electrical impulse, and converting it into a digital signal that your computer can understand and manipulate. That means you'll be leaving the interface and entering the computer with a typical digital cable, such as Firewire, USB, or even Optical TOS-link cables. It will entirely depend upon your converters or interface which you use. Make sure when you purchase that you're aware of what your computer can accept as well. When I talk about the computer here, I'm using it as a catch-all term for your hard drive and software.

Some folks will just store their files on the internal hard drive of their desktop or laptop computer. Some buy external hard drives that connect with USB to store and read the files so they don't run out of room or for higher performance. I prefer to keep a RAID set-up racked in with the rest of my studio gear. The software you're using is what's called a DAW or digital audio workstation.